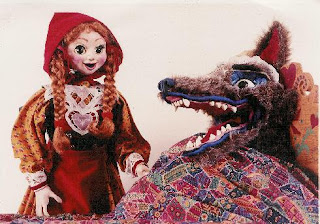 Gina Wilhelm Actress – Little Red Riding Hood is in the Woods!
WHAT: “Little Red Riding Hood” performed by Thistle Theatre, a puppet theater for families.
WHERE/WHEN: Magnuson Park Theatre, 7110 62nd Ave NE, Seattle, WA 98115, Bldg. 47, October 16 and 17 at 1 and 3 p.m.
Sunset Hill Community Club, 3003 NW 66th Street, Seattle WA 98117, in Ballard, October 22 at 7:30 p.m., October 23 and 24 at 1 and 3 p.m.
TICKET PRICE: $7 children and seniors, $9 general admission. Season tickets are $30 children and seniors, $40 general admission.
TO BUY TICKETS: Call 206-524-3388 or visit thistletheatre.org or buy them at the door.
I am appearing in “Little Red Riding Hood” with Thistle Theatre for the next two weekends in October, first at Magnuson Park Theatre (where Seattle Musical Theatre performances), and then at Sunset Hill Community Club in Ballard.
These are our only local performances before we head out on tour, and you don’t want to miss them!
All voices and songs are performed live by me and fellow puppeteers Brian Stabile and Lisa A. Haslbauer. We use Japanese Bunraku-style puppets and song to tell this humorous version of the beloved fairytale.
The script was written by Jean Enticknap and Sue Ennis. Sue wrote the songs, including the “Wolf Aria,” one of the most popular songs written for Thistle Theatre. Jean directed this lively production.
The script is based loosely on the Grimm’s fairy tale, and things do get eaten, but everything turns out okay in the end. This show is recommended for ages 3 and up.
The shows at Magnuson Park Theatre are on October 16 and 17 at 1 and 3 p.m. The theater is in Magnuson Park in building 47. The address is 7110 62nd Ave NE in Seattle.
The shows at Sunset Hill Community Club are on October 22 at 7:30 p.m. and on October 23 and 24 at 1 and 3 p.m. The community club is in Ballard at 3003 NW 66th Street.
Come see this fun puppet show while we’re still in town!
Gina Wilhelm Actress

Actress Courtney Cox has split with her husband of 11 years, David Arquette. Apparently the two have been separated for some time.

They have a joint custody arrangement for their 6-year-old daughter, Coco, even though they have not yet officially ended their marriage.

The couple, who met on the set of the first “Scream” movie, remain amicable, releasing a statment that said they “still love each other deeply.”

Cox currently stars on the ABC program “Cougar Town.” She and David Arquette are still set to work together on the next installment of the “Scream” franchise.

Hopefully the couple will come to an amicable resolution soon.

Rumor has it that Eric Thal is dating actress and Oscar-winning actress Charlize Theron.

Theron had previously dated actor Stuart Townsend, with whom she had appeared in the movies “Trapped” and “Head in the Clouds.”

Townsend also had an uncredited role in Theron’s “Aeon Flux” and had directed Charlize in the movie “Battle in Seattle.”

Eric Thal is also an actor, having appeared at the Neighborhood Playhouse Theatre in New York. He has acted in a number of commercials.

On television, Thal has appeared in “Samson and Delilah” on the TNT network and in the Halle Berry miniseries “The Wedding.”

Thal’s film debut was “A Stranger Among Us.” He acted in “The Gun in Betty Lou’s Handbag,” “The Puppet Masters,” and “Six Degrees of Separation.”