This is the final weekend for Northwest Savoyards’ production of Gilbert & Sullivan’s classic ghost story “Ruddigore.”

We run at the beautiful Historic Everett Theatre at 2911 Colby Ave. in Everett, WA.

The play is a take on the melodramas of the time (1887), and concerns love triangles, a madwoman, bad baronets, a witch’s curse, and ghosts that enforce the curse.

This production is being done in a Steampunk/burlesque style, and features a chorus of professional bridesmaids in fishnet stockings. There are gears and a huge pipe organ.

And of course, there’s Gilbert’s cutting lyrics (some of his best), and Sullivan’s music. It features, among other songs, “My Boy, You May Take it From Me.”

It also includes the patter trio, “My Eyes Are Fully Open.” This trio is so popular, it frequently works its way into other shows, notably Joseph Papp’s production of “Pirates of Penzance.”

I play Mad Margaret, a “love-lonely” maid pining after Sir Despard Murgatroyd. According to reviews, I steal the show and a few hearts.

The show has been receiving terrific reviews. Here’s the Mukilteo Beacon.

Here’s a really nice preview from the Everett Herald, along with a later review.

The Journal Media Group features a nice story on the play, and the Seattle Weekly had a fun preview as well. The Seattle Times had a nice listing with some great comments.

Come check it out for a great night of entertainment! 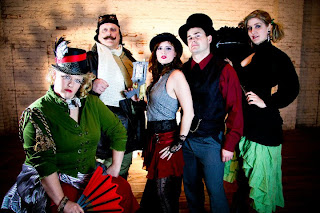