WHAT: “The Tales of Peter Rabbit” performed by Thistle Theatre, a puppet theater for families. 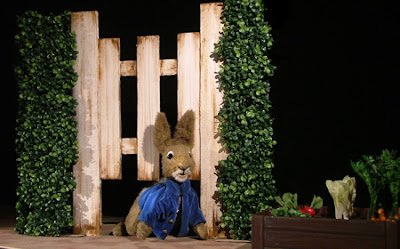 This week marks the opening of “The Tales of Peter Rabbit” at the Center for Puppetry Arts in Atlanta, Georgia.

This puppet play tells the stories of some of Beatrix Potter’s most beloved characters. The main stories are those of Peter Rabbit and his cousin, Benjamin Bunny. It also includes Mrs. Tiggy-Winkle and Mrs. Tittlemouse.

When Peter Rabbit goes adventuring in Mr. MacGregor’s garden and loses his new jacket, how will he get it back?

I play Mrs. Tiggy-Winkle, Benjamin Bunny, Flopsy Rabbit (Peter’s sister), and a mouse without a name.

All voices and songs are performed live by me and fellow puppeteers Ben Burris and Heidi Persson. We use  a variety of puppet styles including Japanese Bunraku-style and rod puppets to tell and sing this British tale.

The script and songs were written by Jean Enticknap and V. Kay Pedersen. Jean also directed this lively production.

This show is recommended for ages 4 and up.