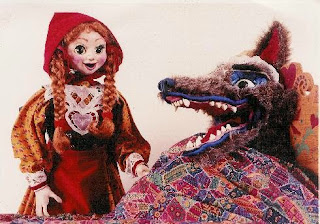 It’s spring, time for Thistle Theatre to close our season with a popular story. This year we present “Little Red Riding Hood” at various locations throughout the Seattle area.

Our take on this fairy tale is set in Bavaria, with all the puppets dressed in traditional Bavarian costumes. I play Red’s mother and grandmother as well as Greta, a woodland rabbit.

All voices and songs are performed live by me and fellow puppeteers Ben Burris and Amy Escobar. We use  a variety of puppet styles including Japanese Bunraku-style puppets to tell and sing this take on the traditional tale.

There are also some rod puppets in this show. This show features several German words and phrases.

This play includes intricate puppetry and the “Wolf’s Aria,” one of the most popular songs in the Thistle Theatre canon!

Magnuson Park shows are on June 13 and 14  at 1 and 3 p.m. Thistle Theatre’s studio is in Magnuson Park in building 30. The address is 6310 NE 74th St. Ste 131 in Seattle.
Please note that the Magnuson Park shows are in our studio, NOT in the theater building! This is different than previous performance at Magnuson. This is a small, intimate space, and seating is VERY limited.
Be sure not to miss this action-packed show full of laughs and fun!

Gina Wilhelm Actress – The Pixie and the Grocer

WHAT: “The Pixie and the Grocer,” performed by Thistle Theatre, a puppet theater for families.

Thistle Theatre’s holiday show has arrived. We present “The Pixie and the Grocer” at various locations throughout the Seattle area.

This is a retelling of a Hans Christian Andersen short story about a pixie who serves a chisler grocer and his wife. A new poet has moved into the grocer’s garret, and from him, the pixie learns of the wonders of art and poetry.

Eventually the pixie must decide if he wants to live a comfortable life, or go the artist’s way.

I play Mrs. Hansen, the grocer’s wife; Mrs. Nielsen, a customer; and an enchanted lantern.

All voices and songs are performed live by me and fellow puppeteers Ben Burris and Zane Exactly. We use  a variety of puppet styles including Japanese Bunraku-style, shadow,  and rod puppets to tell and sing this take on this lesser-known fairy tale.

This play features one of Thistle Theatre’s most popular songs (sung in part by me), “It’s All About the Money,” and a delightful sequence where inanimate objects are brought to life.

The show also features shadow puppets illustrating the poetry within the show.

The script and songs were written by Jean Enticknap and Sue Ennis. Jean also directed this lively production.

Don’t miss our terrific show that spreads the message of the importance of art and ideas of substance rather than material things, so important during the holiday season! 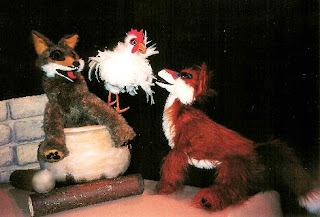 Gina Wilhelm Actress – Meet Brother Coyote and Sister Fox!
WHAT: “Brother Coyote and Sister Fox” performed by Thistle Theatre, a puppet theater for families.
WHERE/WHEN: Magnuson Park Theatre, 7110 62nd Ave NE, Seattle, WA 98115, Bldg. 47, January 29 and 30 at 1 and 3 p.m.
Bellevue Youth Theatre, 16661 Northup Way, Bellevue, WA 98008, February 12 and 13 at 2 and 4 p.m.
Sunset Hill Community Club, 3003 NW 66th Street, Seattle WA 98117, in Ballard, February 18 at 7:30 p.m., February 19 and 20 at 1 and 3 p.m.
TICKET PRICE: $7 children and seniors, $9 general admission. Season tickets are $30 children and seniors, $40 general admission.
TO BUY TICKETS: Call 206-524-3388 or visit thistletheatre.org or brownpapertickets.org or buy them at the door.
I am appearing in “Brother Coyote and Sister” with Thistle Theatre for the next weekend and two weekends in February.
The January performances are at Magnuson Park Theatre (where Seattle Musical Theatre performances). February performance are at Bellevue Youth Theatre and then Sunset Hill Community Club in Ballard.
All voices and songs are performed live by me and fellow puppeteers Brian Stabile and Lisa A. Haslbauer. We use Japanese Bunraku-style puppets and song to tell this humorous version of the beloved fairytale.
The script was written by Jean Enticknap and Stephanie Diaz Reppe. Sue Ennis wrote the songs, and Jean directed this lively production.
The script is based on a set of Mexican folktales and incorporates Spanish and English in the storytelling. This show is recommended for ages 3 and up.
The shows at Magnuson Park Theatre are on January 29 and 30 at 1 and 3 p.m. The theater is in Magnuson Park in building 47. The address is 7110 62nd Ave NE in Seattle.
The performances at Bellevue Youth Theatre are on February 12 and 13 at 2 and 4 p.m. The theater is in Bellevue at 16661 Northup Way.
The shows at Sunset Hill Community Club are on February 18 at 7:30 p.m. and on February 19 and 20 at 1 and 3 p.m. The community club is in Ballard at 3003 NW 66th Street.
Come see this fun puppet show while we’re still in town!
Gina Wilhelm Actress 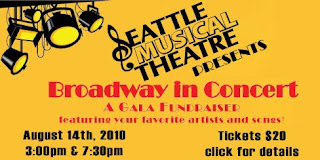 Last Chance to See The Producers!

” closes this weekend at Seattle’s Magnuson Park. The play runs through October 4th.

It is being suggested that audience members be age 17 and up. As Max says of the play-within-the-play, it’s “certain to offend peoples of all races, creeds, and religions.”

Of course, what he neglected to add is that it’s absolutely hilarious.